In 2013 I had a flare up that will live with me forever, all throughout the year I was in and out of hospital numerous times with uncontrollable blood loss and chronic fatigue where slowly my condition took over all aspects of my life! I have never felt so bad!! So in the October I undertook a Colectomy where I had my large bowel (Colon) removed. I was in hospital for about 10 days and back home for about 3 days. The 3 days I was home were incredibly hard – I had no abdominal strength, I felt weak, tired and like I couldn’t do anything for myself.  Little did I know the worst was still to come.

After my couple of days at being at home, I started to develop pain around my belly button and left hand side of my abdomen. It happened about 2/3 hours after I had eaten and the pain became gradually worse. I also had the worst Nausea and Cramping I had ever experienced along with my output either being very watery or non existent! I called my nurse and went straight back into the Hospital and ended up in SEU – The Surgical Emergency Unit. I was on Oxycodone (Morphine) Drips, and heart monitors as my heart was beating uncontrollably my heart rate was 170bpm and I was rushed in for an X-Ray and CT Scan.

Not Ready For Round Two …

The morning of my surgery came, I felt so poorly, the pain was excruciating and the pain killers made me feel sick and if I was honest … I was terrified about my surgery! The last surgery I had was major I was in my surgery for 8 hours plus and the last time I came round my heart had trouble fighting off the anaesthetic. I wasn’t ready for the second surgery, I felt weak and mentally I couldn’t get my head around going under again. 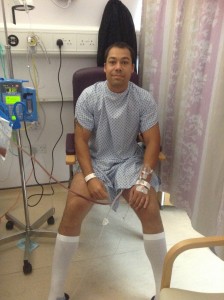 I was taken down to theatre and when I came back up – my heart did its usual trick so I had to stay in observations for another 4 hours until my heart was beating at the right pace. I came back to the ward feeling terrible and slept off the anaesthetic.

The surgeon came to see me later that night, and said they are still not sure whats happening as the couldn’t see a hole in my stomach, liver or bowel, so I would have to stay in for observations. As the days went on I struggled to eat, every time I ate I had this excruciating pain, so I just didn’t eat much as I was afraid I would be in agony! I was put on a soft food diet and told it may be the swelling in my small bowel thats causing this pain so to take it easy and before I knew it I was back home again after a further 2 weeks in hospital.

The ambulance sirens when you’re lying in the back of it is terrifying, the thoughts that ran through my head when I was in so much pain was scary. The pain is something I couldn’t describe and the journey well it felt like a life time!

Monitors beeping, people running around me and family looking terrified … WHAT THE HELL WAS HAPPENING TO ME? Rushed into scanners, doctors and surgeons scratching heads and me lay there watching my heart rate shoot through the roof and I am thinking am I going to make it? My family are behind the doors of the resus room and my partner next to me looking terrified, people rushing around me, my hearts now racing and unable to cope with what ever is wrong with me creeping past 170 and feeling like it’s thumping through my chest.

I have been dosed up on painkillers and given something to make my heart slow down I was able to listen to the people around me, and nobody knew what was wrong and once again the scans still didn’t show anything. I was stable though and transferred to another hospital and the specialist colorectal centre I knew I was in good hands, just wanted to know what was happening to me.

I was getting weaker by the day, weight fell off me and eating became to difficult. The pain was still there and as I was getting really poorly. I felt like I deteriorated by the hour! 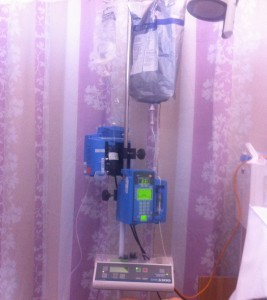 After my weigh in I had lost over 2.5 stone, my consultant knew I needed to build up my strength to make it safe for them to operate on me again, I was now on beta blockers and the Cardiologist had said he wasn’t happy if they operated it wouldn’t be safe on my heart so had to monitor me every half an hour and send me for more scans of the heart until he was happy it was safe for me to go under again if I needed to. 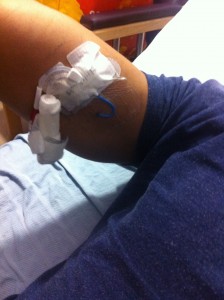 I was given TPN (Total Patient Nutrition) A feeding tube inserted in my arm, across my shoulder and into my stomach to start feeding me 24 hours a day to build up some much needed strength and weight. As my consultant was away and I was a challenging case I was taken under the wing of the Professor he looked through everything, ran more tests and gave me my final diagnosis.

As well as the complications with my heart throughout, the reason for the pain and not being able to eat was because my abdominal wall was strangling my ileostomy, every time I ate it couldn’t come through and I was very lucky my bowel didn’t rupture, but one thing I can say is  I have never experienced pain like it!

Surgery number three came closer, they delayed it as they needed to build my strength with the TPN, and once I was given the all clear from the Cardiologist and a plan was in place with the Cardio team I was ready … I didn’t feel ready, far from it! I knew it had to be done. After hours in surgery and a long stay in the observations unit I was back on the ward, my family said it felt like I had been gone a lifetime – I dread to think what went through their minds while I was gone!

“Sometimes you have to stop worrying, wondering & doubting. Have faith that things will work out, maybe not how you had planned, but just how its meant to be”

Over the next few days I was kept on TPN continuing to build up my strength and started to feel like I was recovering, they slowly introduced me to food again, able to drink and get out of bed and sit in the chair – sounds silly but I was ecstatic to be able to eat something and digest it! 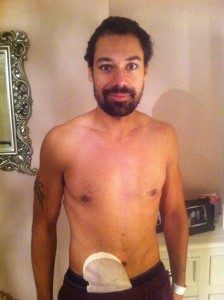 Recovery whilst at home took a long time, I was unable to do a lot for myself, I was incredibly weak and tired, I remember sleeping a lot!

Over the next few months I built myself back up slowly, back on my bike at the start of January 2014 and back in the gym at the end of January setting myself personal goals … lets hope I can achieve them! Their will be bumps in the road but I am an IBD Warrior and we can handle anything!